We couldn’t find any official Money Velocity numbers for the United Kingdom so calculated it using the Equation of Exchange.

We have the numbers for both Money Supply (from the Bank of England) and Nominal GDP (from the Office for National Statistics) for the UK.

The velocity of money is the frequency at which one unit of currency is used to purchase domestically-produced goods and services within a given time period. In other words, it is the number of times one British Pound is spent to buy goods and services per unit of time. If the velocity of money is increasing, then more transactions are occurring between individuals in an economy.

The frequency of currency exchange can be used to determine the velocity of a given component of the money supply, providing some insight into whether consumers and businesses are saving or spending their money.

Money Supply or Money Stock (we have considered M3)

Broad Money M3: Broad money (M3) includes currency, deposits with an agreed maturity of up to two years, deposits redeemable at notice of up to three months and repurchase agreements, money market fund shares/units and debt securities up to two years.

Here is a graph of M3 Money Velocity for the United Kingdom (the complete data set is at the end of this post, please contact us if you would like the data in a spreadsheet), 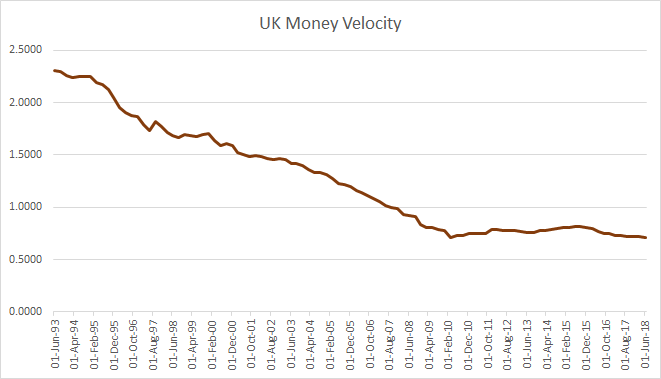 Money velocity in the United Kingdom is currently less than 1 which means that money being printed (even notionally) isn’t even circulating once. It has fallen significantly this century, it has started increasing as GDP growth is accelerating and Money Supply growth is decelerating. The complete data set is at the end of this post, please contact us if you would like the data in a spreadsheet.

Given that money velocity is so low now implies

1. Consumer and business confidence for spending isn’t particularly high.
2. Consumers and businesses aren’t borrowing too much money either.
3. There is ample (probably excessive) liquidity in the system.

For the United Kingdom it would appear that years of Quantitative Easing has caused too much liquidity which in turn has caused money velocity to fall significantly.

Here’s how Australian Money Velocity has changed over the years

Impact of (potentially) higher interest rates on households in the UK