The reasons aren’t what you think …

No, there isn’t much of an impact on end consumers (yet)

The Federal Reserve increased the target for the bank’s benchmark rate by 0.25% (to a range of 2% to 2.25%) two weeks ago, the eighth rate rise since 2015. Are rising interest rates really having any impact on mortgage or saving rates?

And the chart indexed to January 1st, 2010 = 100, see how detached the average benchmark target rate is,

Mortgage, Loans and Savings interest rates are completely detached from the Federal Reserve’s benchmark rate. This isn’t entirely surprising given ample liquidity in the financial system. Since the financial crisis of 2008-2009 the difference between bank deposit growth and bank loan growth in the U.S. diverged in a big way, graph below,

No, there hasn’t been much of any impact on Treasurys (yet)

Like Mortgage and Saving rates, yields on Treasurys (U.S. government bonds) haven’t risen as much as interest rates, but they have risen over the past year nonetheless yet remain historically low,

But the fiscal situation of the U.S. has worsened (bigly)

Federal government debt has been increasing and stands at over $21 trillion (see chart below). The US is projected to have a $1 trillion annual fiscal deficit by 2018 or 2019.

The last surplus was 17 years ago,

A lot of government borrowing is long term (10-year and 30-year bonds being the most popular) so the impact of rising bond yields won’t be felt immediately.

On an average, around 7% of the total debt is rolled over for the US every year plus new borrowing is made.

A 1% (100 basis points) rise in yields would increase the total interest cost on existing borrowings (new borrowings are not included in this calculation) by 8.2% for the US in the first year (and compounded in future years).

That is an extra $11 billion for every 25 bps in yields. Absolutely Staggering. (Related: The impact of U.S. tax cuts on Federal finances so far)

… and then there are corporate bond yields

Corporate bonds fund buybacks (estimated at an $1 trillion this year) which have helped the equity markets soar. Soaring yields mean fewer buybacks. The equities party will be over if yields continue soaring. (Related: Four reasons stock valuations are still soaring) 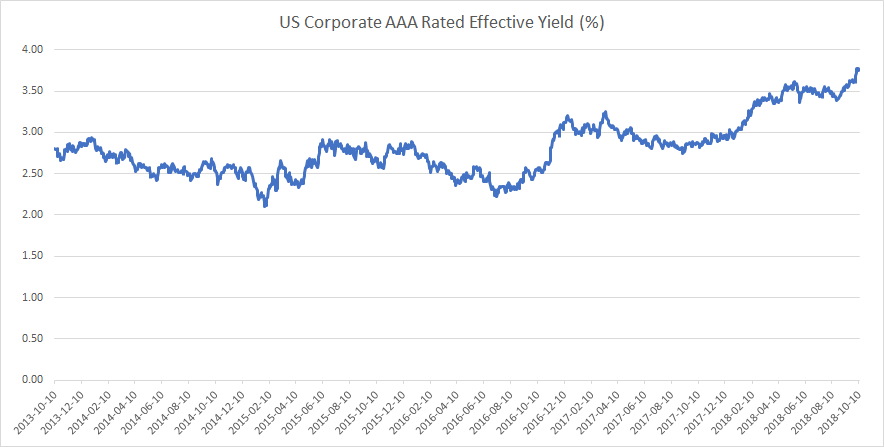 But there is an upside to raising interest rates …

They can be cut if required. The Federal Reserve has a tool to fight a recession. What will the European Central Bank do if a recession hits?  (Related: Interest Rates globally are changing at the fastest pace ever)