The Monetary Policy Committee of the Bank of England meets on Thursday, May 10 to decide the direction of interest rates. 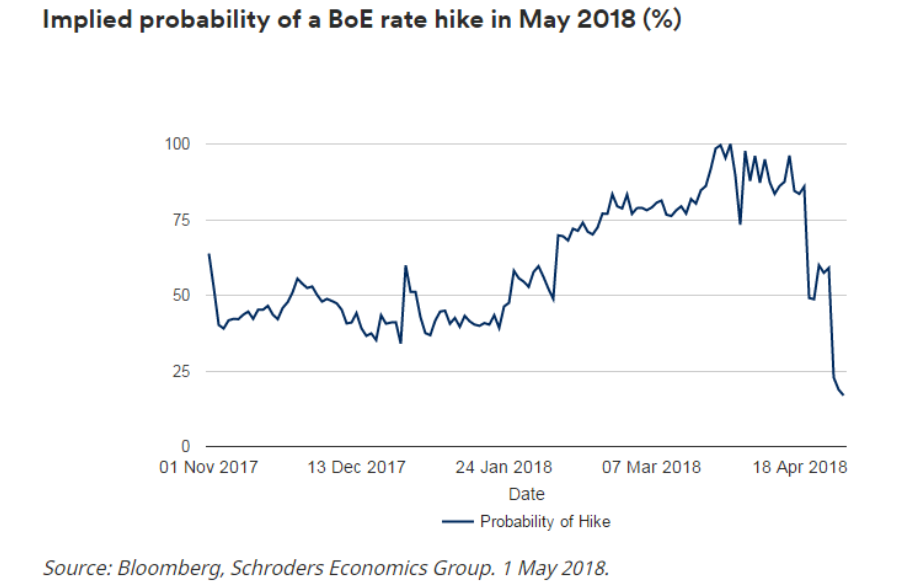 With inflation running at over 25% and its currency falling over 20% against the dollar in just a month, the Central Bank of Argentina has now hiked interest rates by a total of 12.75% to 40% in the last two weeks.

The country has almost depleted all its foreign currency reserves with a sale of $1.5 billion of reserves some months ago.

The LIBOR OIS spread has begun to gradually decline back towards levels seen last year. Global credit squeeze averted then or a false alarm?

Stephen S. Poloz (Governor – Yellowknife Chamber of Commerce) delivered a speech on “Canada’s Economy and Household Debt: How Big Is the Problem?”. You can read the entire speech here and below are some snapshots:

“Two trillion dollars of debt is a big number. Let us try to put some context around it. A common way to measure household debt is to compare it with the amount of disposable income people have. In Canada’s case, household debt is around 170 per cent of disposable income. In other words, the average Canadian owes about $1.70 for every dollar of income he or she earns per year, after taxes.

That ratio is a Canadian record, and up from about 100 per cent 20 years ago. Although this ratio is on the high side, other economies such as Sweden, Norway and Australia have even more household debt relative to disposable income.

In fact, about 8 per cent of indebted households owe 350 per cent or more of their gross income, representing a bit more than 20 per cent of total household debt. These are the people who would be most affected by an increase in interest rates. We are closely watching the vulnerability represented by this group and the debt they carry, and how it poses a risk to both the financial system and the economy. And it is important for these households to understand how personally vulnerable they may be.

If Shakespeare were writing today, he might say that our financial system gives Canadians more choices than ever in deciding whether to be, or not to be, in debt. Today’s record level of household borrowing reflects the evolution of the financial system and the comfort level of Canadians in taking on debt. But it also reflects a prolonged period of very low interest rates and rising house prices.”

Meanwhile, Andrew G Haldane (Chief Economist at the Bank of England) delivered a speech on “Will Big Data Keep Its Promise?”. You can read the entire speech here and below are some snapshots:

“data on music downloads from Spotify has been used, in tandem with semantic search techniques applied to the words of songs, to provide an indicator of people’s sentiment. Intriguingly, the resulting index of sentiment does at least as well in tracking consumer spending as the Michigan survey of consumer confidence.

And why stop at music? People’s tastes in books, TV and radio may also offer a window on their soul. So too might their taste in games. Indeed, I am interested in the potential for using gaming techniques, not just to extract data on people’s preferences, but as a means of generating data on preferences and actions.

Existing models, empirical and theoretical, often make strong assumptions about agent behaviour. Theoretical models are based on axiomatic assumptions. Empirical models are based on historical behaviours. These restrictions may, or may not, be borne out in future behaviour. If they are not, the model will break-down out of sample, as did the (deductive) DSGE model and the (inductive) Google flu model.

A gaming environment could be used to understand behaviour in a way which placed fewer restrictions. People’s behaviour would be observed directly in the act of game-playing which, provided this behaviour was a reasonable reflection of true behaviour, would give us new data. Because this is a virtual rather than real world, with shocks controlled and regulated, that could make it easier to address issues of causality and identification in response to shocks, including policy shocks.”