Three-month U.S. Dollar London interbank offered rate (LIBOR) that serves as the basis for trillions of dollars in loans and floating-rate securities globally hit a 10-year high of 2.45%, the highest level since November 2008. 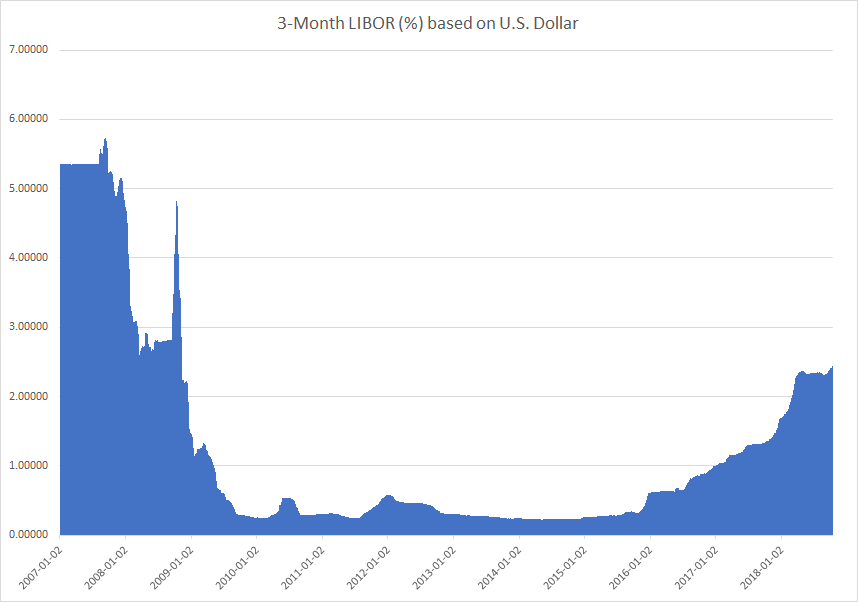 Higher LIBOR rates particularly hit developing economies as they tighten financial conditions and force local currency benchmarks even higher. Emerging economy currencies have lost significant value against the dollar in the past 6-months (the Dollar Index is up some 7% in the past 6-months and the MSCI Emerging Market equities index is down some 17% in the same period) and higher LIBOR rates will further raise questions about the ability of emerging economy borrowers to repay back loans priced in dollars.

The market is expecting another Federal Reserve rate hike this year and at least another three next year which has caused the rate to head higher but is there an element of rising credit risk causing this? Probably not at this stage because the spread over the overnight index swaps (OIS) hasn’t surged as it did earlier this year in April but there is a new risk that could emerge.

Many corporations in the U.S. and elsewhere have their debt interest benchmarked against the LIBOR rate and rising rates could significantly increase debt servicing costs. LIBOR costs have hit multi-year highs just before each of the last three U.S. recessions, we will have to wait to see if this time is any different.