The IMF reckons that global economic activity slowed notably in the second half of 2018. According to the IMF, the escalation of US–China trade tensions, credit tightening in China, macroeconomic stress in Argentina and Turkey, disruptions to the auto sector in Germany, and financial tightening alongside the normalization of monetary policy in the larger advanced economies have all contributed to a significantly weakened global expansion. 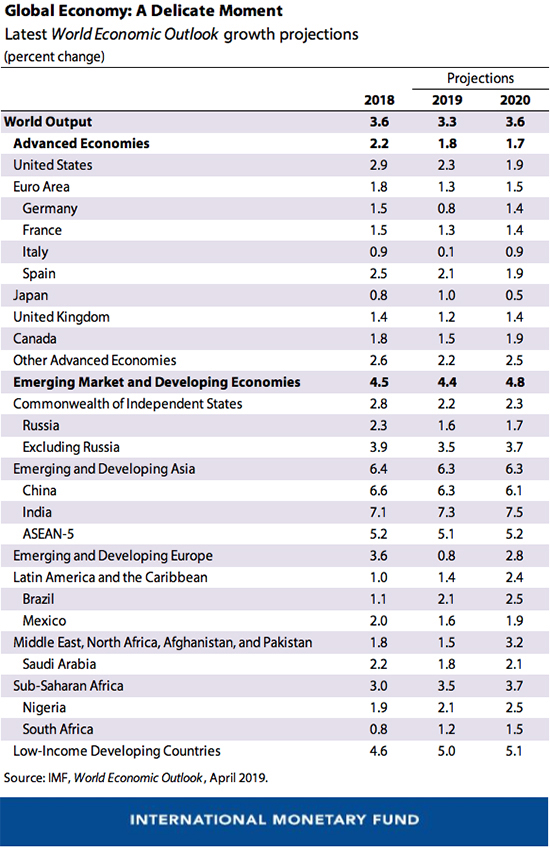 As per the IMF, risks are tilted to the downside while global growth could surprise favourably if trade differences are resolved quickly so that business confidence rebounds and investor sentiment strengthens further, the balance of risks to the outlook remains on the downside. A further escalation of trade tensions and the associated increases in policy uncertainty could further weaken growth.

The IMF sees a potential for sharp deterioration in market sentiment, which would imply portfolio reallocations away from risk assets, wider spreads over safe haven securities, and generally tighter financial conditions, especially for vulnerable economies. Possible triggers for such an episode include a no-deal Brexit withdrawal of the United Kingdom from the European Union; persistently weak economic data pointing to a protracted global growth slowdown; and prolonged fiscal uncertainty and elevated yields in Italy—particularly if coupled with a deeper recession—with possible adverse spill overs for other euro area economies. A rapid reassessment by markets of the monetary policy stance in the United States could also tighten global financial conditions.